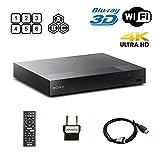 Works on any TV with HDMI connection. Now, watch all your favorite DVD’s in region 0 1 2 3 4 5 6 PAL/NTSC + BD ZONE A/B/C with full HD 1080p.TThe Sony BDP-S6200 4K Wi-Fi and 3D Blu-ray Disc Player is designed to deliver pristine picture quality from Blu-ray and DVD discs. This Sony Blu-ray player supports full HD 1080p Blu-ray disc playback from its HDMI output, and can also upscale DVDs and non-3D Blu-ray discs to near 4K quality. This model also features the Sony Entertainment Network (SEN), which gives you access to over 200 streaming services such as Netflix, Pandora, Hulu Plus, and YouTube. Ethernet and 802.11n Wi-Fi are built into the player for high-speed Internet connectivity. A dual-core processor is also onboard for speedy menu navigation and overall performance Sony’s top performing Blu-ray player incorporates a built-in dual core processor that delivers a powerhouse performance minus the lag. Experience lightning-quick delivery speeds as web pages load quicker, movies and media stream faster and playback appears noticeably smoother. Unique to Sony, TRILUMINOS Display technology creates a heightened sense of depth and incredibly true, natural shades of colors – just the way you want them. Hard-to-reproduce reds, aqua blues and emerald greens are displayed beautifully, so landscapes and seascapes look more vivid. Faces look better too, with natural skin tones. Give your mobile media the big screen treatment and wirelessly stream the display on your compatible Android device directly to your compatible TV. With Miracast screen mirroring and super Wi-Fi, streaming your favorite videos, pictures and more is fun and easy.

This website uses cookies to improve your experience while you navigate through the website. Out of these, the cookies that are categorized as necessary are stored on your browser as they are essential for the working of basic functionalities of the website. We also use third-party cookies that help us analyze and understand how you use this website. These cookies will be stored in your browser only with your consent. You also have the option to opt-out of these cookies. But opting out of some of these cookies may affect your browsing experience.
Necessary Always Enabled

Any cookies that may not be particularly necessary for the website to function and is used specifically to collect user personal data via analytics, ads, other embedded contents are termed as non-necessary cookies. It is mandatory to procure user consent prior to running these cookies on your website.